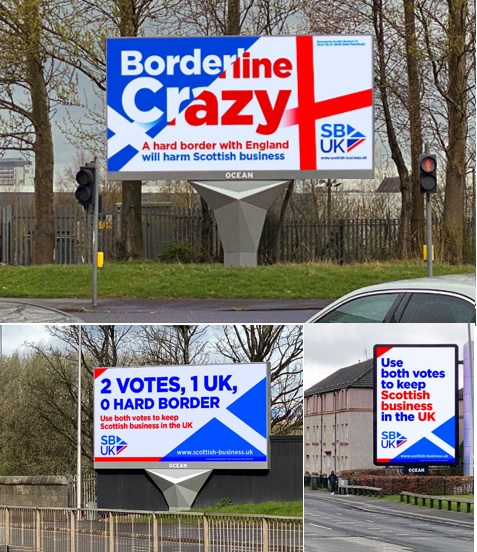 Independent, non-party business group Scottish Business UK (SBUK) has called for urgent clarity ahead of the Holyrood elections over Scottish Government safeguards to keep trade flowing freely in the event that separation leads to a hard border with England.

Following the First Minister’s acceptance on the BBC’s Andrew Marr Show that there would have to be a border if Scotland was taken out of the UK and into the EU, SBUK is urging ministers to come clean on the risk to pandemic recovery of a trade border and publish any civil service assessment of the policy on the economy that exists.

To raise awareness of the issues at stake, the organisation has also launched a billboard and social media campaign, Borderline Crazy, a move driven by its members whose businesses will be profoundly impacted by a trade border with England.

“The situation is urgent. Free trade with the rest of the UK is fundamental to Scotland’s pandemic recovery and long-term prosperity. Yet voters are being told that a nationalist victory on 6 May is a mandate to create a trade border with England that would cost up to £2,800 per person per year in lost income.

“Simply re-joining the EU single market won’t compensate because our trade with the rest of the UK is some four times the size of our trade with Europe. The First Minister says she would somehow ‘keep trade flowing freely’ but admits there would be a border. Businesses need more than airy assurances of this sort and voters deserve to know the real risks that companies face while they are being asked to back separation.”

“With over 90% of our trade coming from manufacturing companies based in England, the prospect of a hard customs border between ourselves and our customers is unimaginable.

“The Covid pandemic has already pushed us to the limits. Like many other Scottish businesses, what we need now more than anything is certainty and stability, allowing us to recover and build plans for the future.”

The Advisory Council currently has a membership overseeing business interests that together employ over 10,000 people in Scotland and 35,000 people across the UK and Ireland.  Profiles of each member can be read at https://scottish-business.uk/about-us/.

Scottish Business UK (SBUK) is an independent, non-party voice for business leaders who want to see Scotland thrive economically as part of the United Kingdom. SBUK is a registered company known as ‘SB Supports the Union Ltd’. https://scottish-business.uk

Scottish Business UK is registered with the Electoral Commission as a non-party campaigner, meaning that the amounts spent on campaign activities during the Scottish Parliament election period will be submitted in returns to the Commission.

SBUK’s digital advertisements (pictured) will feature three campaign messages on rotation at 25 locations in Glasgow and Edinburgh until 9 May.

The LSE’s Centre for Economic Performance predicts the economic costs of Scotland leaving the UK are two to three times greater than the impact of Brexit and that the combination of separation and Brexit would reduce Scotland’s income per capita by between 6.3 per cent and 8.7 per cent in the long-run: https://cep.lse.ac.uk/pubs/download/brexit17.pdf.