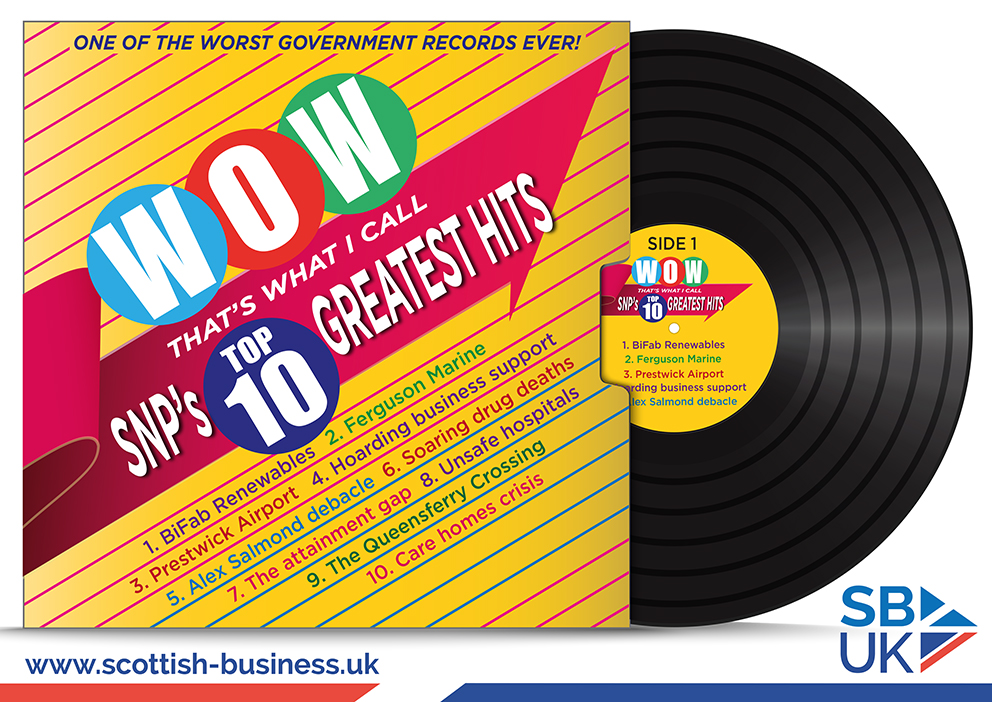 Andrew Marr: “Has the SNP modelled the impact of independence on people’s incomes”?
Nicola Sturgeon: “Not yet”.
The Andrew Marr Show, BBC, 25 April 2021

Short of any substantial analysis from the SNP about the impact of breaking up the UK, we must look to the party’s track record in power for clues about what shape Scotland might end up in if it gets its way. So, until it puts some meat on the bone of the case for separation, here’s a rather depressing top-10 list of scandals, broken promises and straightforward incompetence brought to you by Ms Sturgeon and her ministers. This really is all we have to go on.

The failure of the BiFab Renewables, bought by the Scottish Government in 2017 for £34m and sold to Canadian firm DF Barnes before going into administration last year due to an “absence of supply chain protections” left trades union bosses to lament a sorry episode that “exposes the myth of Scotland’s renewables revolution” and shines a light on “a decade of political hypocrisy and failure”.

A committee of MSPs recently labelled the Scottish Government’s procurement of two new ferries, ordered from Ferguson Marine – in a deal that was supposed to help revive the Clyde ship building industry – as “a catastrophic failure”. Already four years late when the MSPs reported in December 2020, completion has been pushed back yet again. The original £97m bill for the ships ballooned by up to £114m, plus £4.3m of Covid-induced shutdown costs for the yards.

On a similar theme, late last year a report by the Auditor General urged the Scottish Government to adopt greater transparency in its approach to business loans to Prestwick Airport, among others. Audit Scotland noted that government loans of £3.5m to Prestwick as well as £9m to BiFab were subsequently valued at nil at the end of the 2020/19 financial year “to reflect the likelihood of repayment”. So far £43m has been loaned by government to the airport since it was saved from closure in 2013 and it remains to be seen whether any new buyer will take on that debt.

In 2019 the Scottish Government had to pay more than £500,000 in legal expenses to former First Minister Alex Salmond following a mishandled inquiry into sexual harassment claims; an episode that cascaded into a criminal trial, an acquittal, a lengthy parliamentary inquiry, a huge SNP split and the creation of a new party whose purpose is to gerrymander the UK out of existence by securing a not-so-super ‘supermajority’ at next month’s Holyrood election.

Suspicions among many Scottish business owners that the Scottish Government was ‘hoarding’ pandemic relief provided by the UK government in order to build up a ‘war chest’ for give-aways haven’t gone away. A Fraser of Allander Institute report in November highlighted some £1bn of money squirrelled into reserve rather than being distributed to businesses entering another lockdown. Lo and behold, a plethora of expensive pre-election boons, from free bikes for kids to a new National Care Service. Yet, in the words of the IFS, “the SNP provides very few details on how much would be spent on COVID recovery in the months and years ahead, in keeping with their more general lack of transparency on their spending plans.”

The bridge “that was never meant to shut” did exactly that three times in the 12 months prior to February this year, with ice falling from the new Queensferry Crossing causing fresh havoc for motorists in Edinburgh and Fife.

Scottish business will only ever be as good as the people we educate and train to meet the challenges in our economy. That means the attainment gap, and the overall state of Scottish education, are vital issues for companies as well as young people themselves. Despite Nicola Sturgeon telling us that fixing attainment would be the single issue on which she would like to be judged when she came to power, a recent Audit Scotland and Accounts Commission report said progress had been ‘limited’ and ‘falls short’ of the government’s targets. Meanwhile an OECD report on progress to improve school curriculum standards has conveniently been kicked into the summer so that voters in May wouldn’t have evidence with which to judge ministers.

The Scottish Government’s flagship healthcare spending priorities – the £840 million Queen Elizabeth University Hospital in Glasgow and the sick kids’ hospital in Edinburgh – were both victims of procurement incompetence. Contamination problems in Glasgow led to the deaths of four people, while the Edinburgh facility has been delayed nearly a decade due to problems with ventilation and drainage.

First Minister Nicola Sturgeon has grudgingly admitted this month that her government “took our eye off the ball” on drugs policy, leading to rising numbers of deaths since she took office and leaving Scotland labelled the drug death capital of Europe. The 1,264 fatalities seen in 2019 were double the number when she took over from Alex Salmond in 2014, giving Scotland a death rate three and a half times higher than England and Wales.

This month the Crown Office revealed that at least 3,400 Covid-related deaths in Scottish care homes are under investigation, highlighting the Scottish Government’s catastrophic failure to adequately protect the most vulnerable people in society during the pandemic.  Health Secretary Jeane Freeman admitted that sending 113 elderly hospital patients who had tested positive for Covid 19 to care homes “was a mistake.”

For more on the SNP’s track record in power and why it bodes very poorly indeed for business and communities if Scotland leaves the UK, SBUK is happy to recommend: THE SNP RECORD: good or bad? A review of the impacts and outcomes of SNP Government policies for an in-depth view.