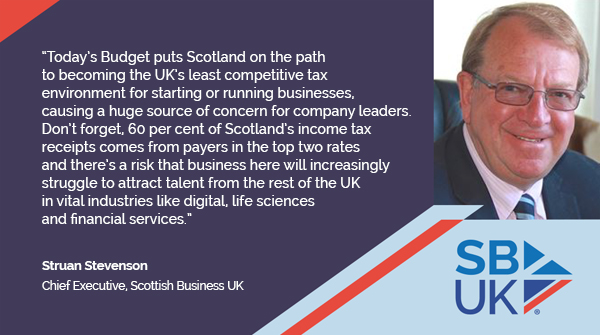 That was the warning from Scottish Business UK’s Chief Executive Struan Stevenson, as Deputy First Minister John Swinney announced income tax changes that include raising the higher rate from 41p to 42p in the pound and increasing the top rate from 46p to 47p.

The business group pointed out that the Scottish Government had wasted millions of pounds in taxpayers’ money in recent years through direct investment in industrial assets like Ferguson Marine, Prestwick Airport, BiFab and the Lochaber Aluminium Smelter.

These were among the interventions criticised by Audit Scotland earlier this month for lacking transparency over the value of support provided, the risks involved and the benefit of outcomes expected.(1)

“Today’s Budget puts Scotland on the path to becoming the UK’s least competitive tax environment for starting or running businesses, causing a huge source of concern for company leaders. Don’t forget, 60 per cent of Scotland’s income tax receipts comes from payers in the top two rates and there’s a risk that business here will increasingly struggle to attract talent from the rest of the UK in vital industries like digital, life sciences and financial services.

“Yes, business wants well-run and financed public services, but the government must remember that it needs companies to operate in a prosperous environment if it wants to sustain employment and grow the economy. Having an ever-widening income tax gap with the rest of the UK is a huge gamble that risks deterring investment and consumer spending, particularly at a time of rising costs.

However, welcoming the decision to reallocate £20m that had been earmarked for a referendum on independence, Struan added:

“Following the Supreme Court’s recent decision that it is beyond Holyrood’s powers to legislate for a new referendum, the writing was on the wall for the Scottish Government’s ill-advised £20m campaign to break up the UK.

“Businesses will breathe a sigh of relief that those funds won’t be held back or wasted in the coming year, but would value a longer-term commitment that rules out further attempts at constitutional upheaval.”