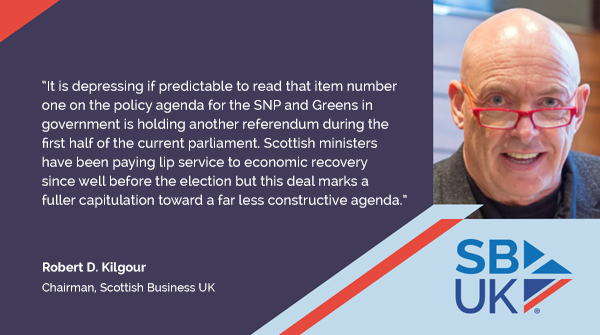 Commenting on the deal between the SNP and Scottish Greens, Robert Kilgour, Chairman of Scottish Business UK said:

“It is depressing if predictable to read that item number one on the policy agenda for the SNP and Greens in government is holding another referendum during the first half of the current parliament. Scottish ministers have been paying lip service to economic recovery since well before the election but this deal marks a fuller capitulation toward a far less constructive agenda.

“In the same week that the Scottish Government’s own GERS figures showed a yawning, record deficit at the heart of the public finances worth £36.9 billion, the First Minister should instead be working in ways to partner with the UK government to find ways to improve our joint prosperity.

“Businesses will be poring over the fine print of the deal in the days and months ahead to see exactly how many of their interests have been sacrificed in the race to get anti-growth Green MSPs into government and engineer constitutional chaos.”