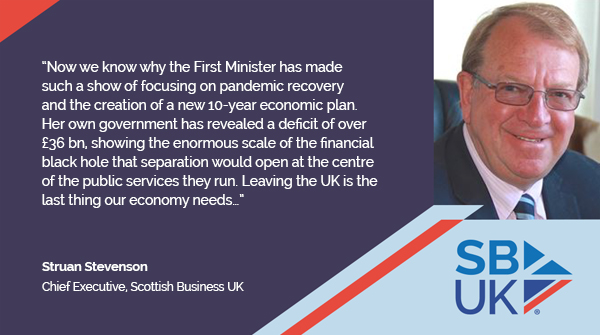 Responding to today’s publication of Government Expenditure & Revenue Scotland 2020-21 which shows Scotland has recorded an unprecedented deficit of over £36 billion in the past year, Struan Stevenson, Chief Executive of Scottish Business UK said:

“Once again the Scottish Government’s GERS statistics provide a showcase for the value that being part of United Kingdom delivers for Scotland and a warning of the impact on our economy of the price of separation.

“Now we know why the First Minister has made such a show of focusing on pandemic recovery and the creation of a new 10-year economic plan. Her own government has revealed a deficit of over £36 billion, showing the enormous scale of the financial black hole that separation would open at the centre of the public services they run.

“Leaving the UK is the last thing our economy needs and to suggest otherwise is to ignore the scale of the challenges we have faced as a Union and will continue to face for some time to come. Everything from the vaccine programme that has allowed businesses to reopen, to the financial support that enabled them to keep trading, happened because of the pooling and sharing of resources enabled by our place in the UK.

“The concern of business now is that a partnership with the anti-growth Scottish Greens signals more policy confusion and a renewed drive for a referendum after the briefest of summer breaks. GERS shows that any such plans are built on shaky economic ground. Rather than putting the Greens in government, the First Minister should be doubling down on collaboration with the UK Government instead.”

–  SBUK’s Advisory Council currently has a membership overseeing business interests that together employ over 10,000 people in Scotland and 35,000 people across the UK and Ireland.  Profiles of each member can be read at https://scottish-business.uk/about-us/. SBUK is a registered company known as ‘SB Supports the Union Ltd’.

– The Government Expenditure & Revenue Scotland 2020-21 is published at https://www.gov.scot/news/government-expenditure-revenue-scotland-2020-21/.