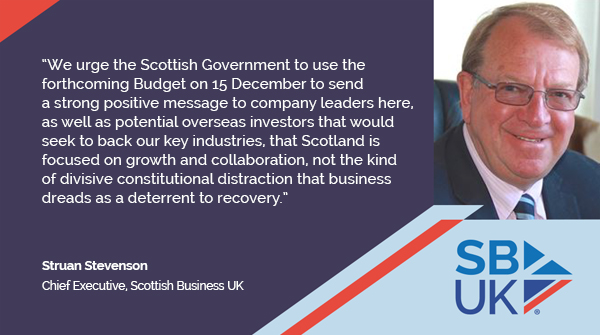 Scottish Business UK has written to Deputy First Minister and Cabinet Secretary for Covid Recovery John Swinney MSP ahead of this month’s Scottish budget statement, urging the government to prioritise economic growth over the campaign for independence.

SBUK Chief Executive Struan Stevenson has labelled plans to spend £20 million on a referendum in the current economic climate as “unthinkable” and outlined a range of policies from the government’s own National Strategy for Economic Transformation that the money could be spent on to better effect.

The letter is copied in full below.

As you know, in May this year the Scottish Government’s Resource Spending Review confirmed a proposed budget allocation of £20 million during 2023-24 to support ministers’ policy of holding a referendum on independence.[1] Against the current economic backdrop it seems clear that such significant spending on constitutional matters can no longer be thought sustainable or prudent in the current economic climate.

Indeed, having tasked a large civil service team to build a new case for taking Scotland out of the UK, and having spent a reported £1.5 million on activity including a set of three ‘Building a New Scotland’ policy papers ahead of a referendum that is not going to happen, there is an urgent need for a change of direction in this month’s Scottish budget. The capacity of Scottish business and our vital public services to weather the current economic downturn that has seen GDP fall 0.2% in the third quarter of 2022, will only be fulfilled if the Scottish Government is completely focused, working in collaboration with the Westminster government, on shaping the conditions for growth.

A recent assessment to support the Scottish Government’s own National Strategy for Economic Transformation (NSET) shows ways that this can happen if ministers focus on current needs and prioritise the delivery of the ministers’ economic priorities[2].

For example, if reallocated in the 2023-24 Scottish Budget to support businesses, the Scottish Government can double the level of direct investment in Scottish companies through Scottish Enterprise Growth Investments since the NSET’s publication. Alternatively, it could almost double the £25 million Low Carbon Manufacturing Challenge Fund to help Scottish manufacturing companies develop the low carbon products, processes and services that they and the wider economy need to support net zero targets in the midst of the cost-of-energy crisis. Or it could multiply by a factor of ten the amount of investment in computing science hardware in Scotland’s schools since May, thereby helping to upskill the workforce of tomorrow.

To keep wasting the financial and human resources at the Scottish Government’s disposal when these and a myriad of other practical options are open to ministers is unthinkable.

Instead, we would urge you to use the forthcoming Budget on 15 December to send a strong positive message to company leaders here, as well as potential overseas investors that would seek to back our key industries, that Scotland is focused on growth and collaboration, not the kind of divisive constitutional distraction that business dreads as a deterrent to recovery.