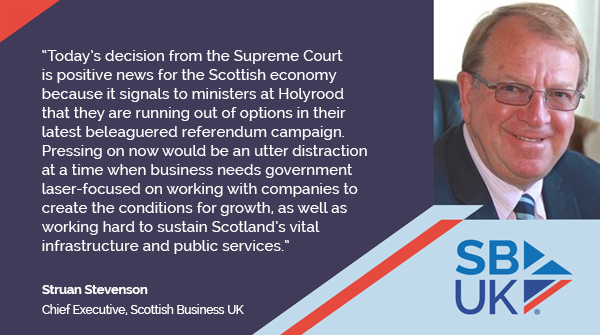 The Scottish Government must turn its attention away from the constitution and refocus its sights on creating growth in Scotland’s economy and sustaining under-pressure public services.

That was the message from business group Scottish Business UK (SBUK) as it welcomed the Supreme Court’s decision, delivered this morning, that ministers can’t legitimately press ahead with plans to hold a ballot next year.

“Today’s decision from the Supreme Court is positive news for the Scottish economy because it signals to ministers at Holyrood that they are running out of options in their latest beleaguered referendum campaign.

“Pressing on now would be an utter distraction at a time when business needs government laser-focused on working with companies to create the conditions for growth, as well as working hard to sustain Scotland’s vital infrastructure and public services.”

SBUK is now calling on the Scottish Government to confirm that it will abandon proposals to use the next general election in 2024 as a ‘de facto’ referendum, arguing that doing so would be a pointless distraction from the work needed to support Scottish companies through the tough year ahead.

“It’s time Scottish ministers tore up their ‘Plan B’, to use the next general election as a de facto ballot on breaking up the UK. To continue the same pointless indyref campaign would be a dereliction of duty, particularly given the weakness of the prospectus already put forward by the SNP government on everything from currency and trade to EU membership.

“For business leaders those ideas have been a non-starter, promising only uncertainty to companies and lower incomes for households across Scotland. We urgently need ministers to stop taking us up legal blind alleys and get back to governing.”

–  Scottish Business UK (SBUK) is an independent, non-party voice for business leaders who want to see Scotland thrive economically as part of the United Kingdom. SBUK is a registered company known as ‘SB Supports the Union Ltd’. https://scottish-business.uk