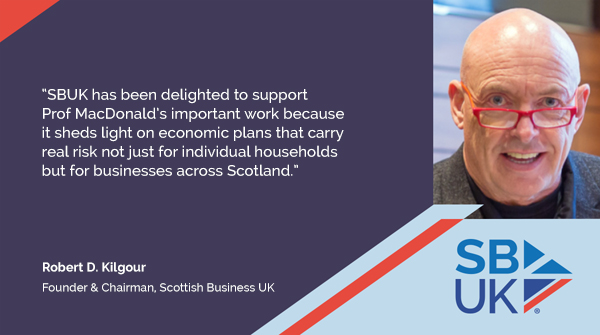 Crashing out of the UK pound in the wake of an independence vote would cost the average Scottish household 20% of their income, according to new analysis published today.

The findings, published today on ourmoney.scot, a new website founded by leading currency expert Prof Ronnie MacDonald in association with Scottish Business UK (SBUK), set out how the introduction of a new Scottish currency would hike the cost of imports, increase debt costs and lead to higher interest rates.

Households which currently take home £35,000 a year – the Scottish average – would see their spending power slashed by the equivalent of £7,300, the analysis says.

The website provides visitors with a tool to discover exactly how much they would be affected according to their income. It shows how only those at the very top end of the income bracket would have more spending power than under the Union.

Last month the SNP government announced it plans to introduce a new Scottish currency after a series of tests have been met, and would keep using the pound on Day One.

However, Prof MacDonald – who is professor of macroeconomics at the Adam Smith Business School at Glasgow University – warns today that Scotland would be forced to adopt a new independent currency immediately after independence.

A new currency worth 20-30% less than the pound would have a drastic impact on household incomes.

The analysis finds that, for an average household, imported goods would cost the equivalent of £4,300 extra.

Existing sterling-denominated debts would overnight become more expensive to repay, to the tune of around £1,500 a year. Expected interest rate rises would be in the region of £1,500 a year.

“SBUK has been delighted to support Prof MacDonald’s important work because it sheds light on economic plans that carry real risk not just for individual households but for businesses across Scotland.” 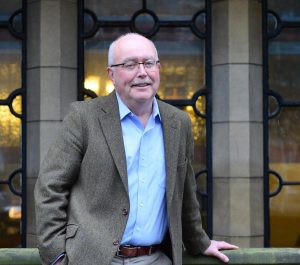 Prof Ronnie MacDonald is currently Professor of Macroeconomics and International Finance, and the former Adam Smith Professor of Political Economy, University of Glasgow. He is a member of Scottish Business UK’s Advisory Council.

His research is published in the economics profession’s leading journals and he has over 18,000 citations recorded on Google Scholar. Ronnie has acted as an advisor and consultant on currency regime issues to several governments, public and private agencies, including the European Commission, General Secretariat for Development Planning, the National Audit Office, the World Bank, the IMF, Credit Suisse First Boston and the Royal Bank of Scotland. Ronnie was the co-author of the report commissioned by the European Commission advising on the final exchange rate values for the formation of the eurozone. The report used the valuation method he developed at the IMF – the Behavioural Equilibrium Exchange Rate – which is widely used by central banks and financial institutions to assess currency valuations.

He has also acted as an expert witness to various committees of the Scottish Parliament, the House of Commons Scottish Affairs Committee and the House of Lords Economic Affairs Committee and consistently ranks in the top 1% of the IDEAS/RePec ranking of over 50,000 economists in the world. He was awarded an OBE in the 2015 Queen’s Birthday Honours list for services to Economic Policy.

Scottish Business UK (SBUK) is an independent, non-party voice for business leaders who want to see Scotland thrive economically as part of the United Kingdom. SBUK is a registered company known as ‘SB Supports the Union Ltd’. https://scottish-business.uk

SBUK’s Advisory Council currently has a membership overseeing business interests that together employ over 10,000 people in Scotland and 35,000 people across the UK and Ireland. Profiles of each member can be read at https://scottish-business.uk/about-us/. SBUK is a registered company known as ‘SB Supports the Union Ltd’.