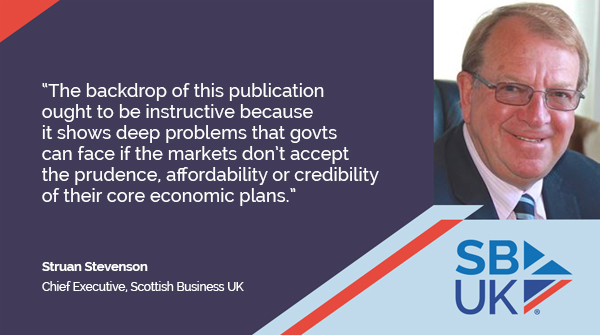 Responding to the publication of the latest Scottish Government independence prospectus on the economy, Struan Stevenson, CEO of Scottish Business UK (SBUK) commented:

“The backdrop of this latest publication ought to be instructive because it shows the deep problems that governments can face if the markets don’t accept the prudence, affordability or credibility of their core economic plans. Blind to those realities, the paper offers very little that hasn’t been chewed over before and dismissed by business leaders as wishful thinking from ministers that didn’t impress in 2014 and hasn’t got better since.

“To be told to choose to leave the UK and face judgement from sceptical markets armed only with the today’s sketchy blueprint is a non-starter. So, while we read more on a sterlingisation policy ahead of transition to a Scottish pound that leaves the Bank of England in charge of Scotland’s post-separation monetary policy with no say for politicians in Edinburgh, we see little sign that ministers get why this is anathema for businesses. Similarly, we get blithe acknowledgement of checks at a new hard border with the rest of the UK, where we do some 63 per cent of our current export trade, but no recognition of the devastation this would have on businesses. And we see a skirting over of the spending deficit Scotland would face after separation, but a trashing of the fiscal transfer arrangements that currently pay for Scotland’s public services.

“Such hazy, wishful thinking just won’t do for company leaders worried about their economic future. Business wants to see government working with it to tackle real-world problems in the economy; not constantly dreaming up plans to create more headaches. Whatever the short-term fiscal pressures facing the UK, Scotland will always be better in it and able to recover, than outside with no route back.”